Africa and the World: Literature, Politics, and Global Geographies

On June 14-17, Yale University hosted the 2017 African Literature Association (ALA) Annual Conference. There was considerable excitement, both within Yale and in the wider New Haven community, at the prospect of hosting such a significant event in the context of Yale’s commitment to African arts and humanities scholarship. It was the biggest Africa-focused conference ever to take place at Yale, bringing together more than 550 participants from around the world, in addition at 45 practitioners from the fields of African film, literature, music, and performance. Delegates came from 15 African countries and from 26 countries overall. There were 650 presentations in 165 panels/roundtables that explored the theme, “Africa and the World: Literature, Politics, and Global Geographies.” Recent shifts in theoretical frameworks for African literary and cultural studies from postcolonial literature toward world literature models were explored, and delegates were encouraged to compare notes across borders, to discuss locally situated literature and scholarship in the wider context of theories of global cultural and economic flows. 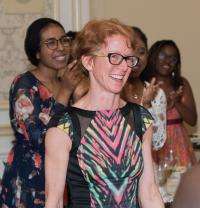 For early career and established scholars alike, the conference offered an opportunity to build networks, exchange ideas, discuss ideas for books and other types of publication, participate in discussions, and present work-in-progress. It is unique for bringing together the largest number of African literary scholars in one setting, enabling feedback from diverse perspectives on ideas that may have greater traction in one place than another. 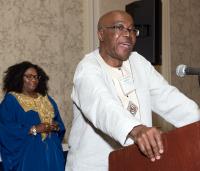 Highlights of the conference included the complementary overlap between the two keynote lectures. Boubacar Boris Diop’s lecture offered a careful and elegant analysis of how the great Senegalese intellectual, Cheikh Anta Diop, criticized his fellow writers for their “deadly illusion … that a borrowed language could frolic beyond borders and translate our genius.” Through his study of Cheikh Anta Diop, and in delivering his critique in the very “borrowed language” of French, Boris Diop warned “the worm is in the fruit that you are biting so loudly into” and made a powerful case for writing in the national languages of Senegal. 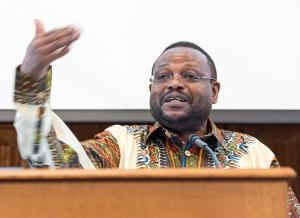 Simon Gikandi’s keynote took a bite out of a different fruit. Where Diop applauded literatures in national languages, Gikandi cleverly used the term “untranslatables,” to describe all those words and concepts in African languages that resist incorporation and translation into English, even when they have been translated into simple English terms. He used the example of the word “pumpkin” in Okot p’Bitek’s famous poem, Song of Lawino: “All the European language translators struggled with the pumpkin, not in its literary meaning … but in its figurative sense. Glossaries were hence needed to explain the centrality of the pumpkin as a mark of the homestead, an idea that was as alien to the target audiences as it was familiar within Acholi culture. The pumpkin metaphor would hence come to function as sign of the incommensurable, of ontological difference, of the location of the poem at home and in the world.” 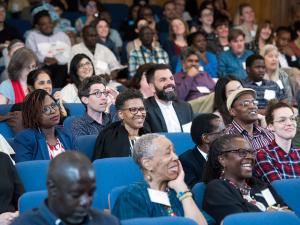 Other highlights of the conference included the mini film festival at the Whitney Humanities Center where five documentaries and new movies were screened alongside discussions with their directors. The four author auditorium events (in partnership with the International Festival of Arts and Ideas concurrently taking place in New Haven) were also a great success, each attracting audiences of more than 100 people. To the great excitement of the audience, Scottish-Sierra Leonean author Aminatta Forna read unpublished material from her forthcoming novel; Cameroonian author Imbolo Mbue – whose novel, Behold the Dreamers, recently featured in Oprah Winfrey’s “Good Reads” – described with great honesty how she came to imagine the characters in her bestselling novel; British-Ugandan author Jennifer Makumbi described the challenges of bringing history to life in her novel, Kintu; and Nigerian-American author Okey Ndibe held the audience’s attention with details of the stories behind his novels. 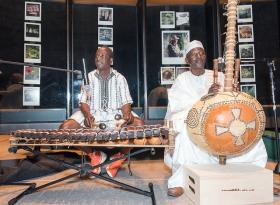 For Stephanie Newell, Professor of English at Yale and the lead organizer of the ALA conference, her favorite moments included the transformation of the Beinecke Rare Books and Manuscripts Library into a colorful, noisy party space with Senegalese master-musician Papa Susso on kora and Balla Kouyaté on balafon at the opening reception. 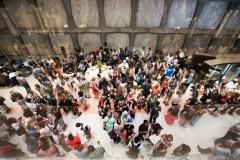 Another memorable moment was when Nigerian author and professor Akachi Adimora Ezeigbo performed a dirge in Igbo, one of the languages of Eastern Nigeria, for the novelist Buchi Emecheta who died earlier this year, and whose son, Sylvester Onwordi, travelled to the conference especially for the events commemorating Emecheta’s life and work. 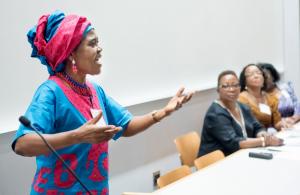 Behind-the-scenes, there was incredible team-work and good humor among the 11 Yale student volunteers under the leadership of Sociology graduate student, Denise Lim. Together, they helped staff the registration desk, wrote Tweets throughout the conference, and escorted VIPs to and from venues. 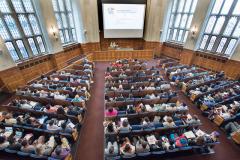 View photos from the 2017 ALA Conference.